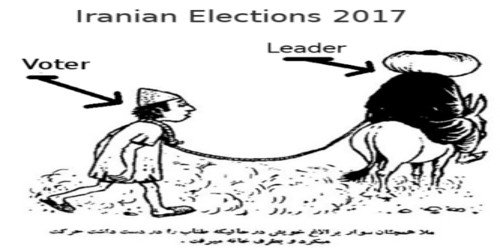 Since the very Islamic Revolution of 1979, every four years, the Iranians participate in an extravaganza called “presidential elections”, reinforcing the theocracy in Iran by approving the Supreme Leader’s man to the post.

What is then the use of a president in a dictatorship, in which the leader holds all the power and has the last word on any subject? The scenario of the elections has been written before the elections by the leader’s close cronies and wrapped in propaganda.

Iranian Presidential Elections: What for?

In April 2013, before H. Rouhani was to be named as president, we wrote an article, questioning the role of the president in Iranian politics.

We aimed to have a more constructive debate among Iranians than using invective and assigning blame to the regime via social media. We were curious to see if the general awareness rose above the spreading misrepresentations and half-truths.

Nothing happened. At best we heard whispers to justify a guilty silence or we were accused of being agents and spies paid by some “enemy” of Iran and Islam.
Four years on, on May 19th, the Iranians will go to polling stations and the president will be named as Ali Khamenei wants it.

During this time, the Iranians, all of them, haters or lovers of the regime, in the country or overseas, have not evolved, not even an iota, in their ideas. The vision for fundamental changes is as blurred as it was decades ago. Worse, the total absence of constructive debate among those who criticise and consider themselves as opponents to the theocratic regime has strengthened the Tehran ayatollahs.
Of course, the Tehran media report of debates among the presidential candidates and try to bring in a show of make-believe “democracy”. Live broadcast debates are organised (some cancelled unexplained). TV political spots for the candidates are on air. But who would believe in a show organised by the censors?

Iran holds one of the worst records for jailed and exiled journalists. The printed newspapers in the country are used as wastepaper to peel vegetables on and dumped in the bin, unread. During his presidency, Hassan Rouhani has passed many bills to restrict even further the freedom of the media and public expression.

However, the media outside Iran, mainly Iranian websites, are commenting about the various aspects of debates, adding their own adjectives and superlatives to speculations on political trifles, rumours, and smokescreens. An example of one such smokescreen was speculations on the candidacy of ex-president M. Ahmadinejad in the upcoming elections, while the Larijani clan were tightening their grip on the judiciary, parliament and lesser governmental offices, trying to cover as much ground left by the death of Hashemi-Rafsanjani as possible.

Most op-ed writers prefer to repeat their own point of view with a skin-deep analysis, rather than use pragmatism and positive questioning.

What we miss in Iranian politics are personalities with principles that can voice their beliefs coherently and frankly. The nth comment on what goes public in Tehran is tedious.

In 2017, we are exactly where we were in 2013 and 2009 and the years before: there is one boss, the Supreme Leader, an infallible sanctified figure tucked away in inner circles; there is his temporal puppet, a president good enough to take all the blame for the failures of regimes and to face the outer world in the line of Khomeini (Khat-e Emam).
The president’s persona and name do not matter, as long as they defer to the leader: Mohammad, Mahmood, or Hassan. They are one-off presidents and fall in disgrace a few months after the term of their mandate.

Khatami and Ahmadinejad are the living examples. These days, both are persona non grata in Iranian politics. H. Rouhani may follow their fate, either this year or in 2021.
Sadly, the clumps of Iranians calling themselves “opposition” (to the regime) are as pathetic and undecided as ever. Whether inside Iran or abroad, commenting on political and personal gossip is a favourite pastime, from which no wheel will ever be set in motion.

Inside the country, there is no structured vision for change. The scenario of moderate Islamists versus radical Islamists is only wishful thinking. Both are nurtured by the Velayat-e Faqih political system. Any change in the fundamentals of it would wash away both from power. Now, the clashes between the smiling Rouhani in Davos or Paris – labelled in the media as moderate – and the ayatollahs who are banning concerts and applauding public hanging – owing to radicals, as many members of the Assembly of Experts are – are smokescreens to hide their personal and cronies’ interests. If and when in danger, they would unite.

In a recent article published by The Guardian, the known Iranian opposition groups came down to two names: MEK and Reza Pahlavi, both decrepit and discredited for decades. However, these two are the only ones that have a sketchy, albeit inefficient, structure.

When it comes to the presidential elections, many comments are about “an elected president” by universal suffrage, which brings in words of constitutional law, public opinion and even hints to democracy and freedom of choice. A mockery of the liberal values.

In late April, six weeks before the elections, the “Assembly of Experts” under the guidance of the Supreme Leader, chose six men, no woman, to be “official” candidates.

In Iran, women can vote, but they cannot be candidates (alongside many other religious and ethnic communities). A few days before the elections, to be held on May 19th, the man chosen as the next president will have a red X on his forehead, so that there will be no mistake among voters as to whom to vote for. The limit of their choice will be to use either a pen or a pencil to mark the name.

In regard to vetting the list of candidates, commentators and experts on Iranian politics omit or dismiss the notion as “not pertinent” and “small matters”. Why within three days of the registering of 1637 candidates for the post were only six named?

All six are men, born and bred to the Shiite hierarchy, and bootlickers of the Supreme Leader; all involved in past and recent killings and corruption.

The six are adepts of “alternative facts, post-truth”, indecent lies that are today’s vote winners for far too many world leaders, from New York to Ankara via Europe, but routine expressions in Iranian politics.
The commentators on the progress of elections invariably fail to highlight the hundreds of hangings, including the underage victims and prisoners of opinion and the silence of the “candidates” on the matter.

It does not occur to them to ask the candidates about dual nationals imprisoned under false accusations and used as bargain chips when negotiating with the West.
Do we hear about billions vanished from the pension fund accounts and oil revenues? Who are responsible for the Plasco building fire which involves the criminal responsibilities of at least three of the candidates, and who would answer to the families of the coal-miners killed in Yourt (Golestan province) held by the holdings and the trusts set up by a hybrid of shark and octopus, i.e. the IRGC/Pasdaran running the economy and finance?

And what do the candidates have to say about the regime’s involvement in Syria, teaming up with Bashar al-Assad who leads a country gassing its own population? Or its involvement with Putin’s Russia, which is spreading its very active and pernicious politics in Iran? I bet, within days after the elections, the new president will fly to Moscow, as did previous presidents.

What is the news from Mr Hossein Fereydoun, brother to Hassan Rouhani, today’s president and candidate to his own post, accepting bribes from all sides, as soon as the JCPOA was signed? Why are the commentators/interviewers refraining from inquiring into why the Iranian regime spends over half of its oil revenue on military development at home and abroad, and uses cutting-edge digital technology for spying on its citizens worldwide?
All of these matters are verifiable from authentic sources. These and much more are legitimate questions to ask the candidates for the presidency. No one will be asked. Too taboo in the realm of the Islamic values that adorn the Diktat of Tehran’s autocrats.

Does any one of them have a programme? Silly me!

As Iranians, when having a drink with our Western friends, we spend hours discussing our differences with the Islamo-Arab worlds, usually to boast of our superiority as Persians. However, we have lots in common, for example bending blindly and thoughtlessly to the politics of Islam and its megalomaniac leaders. Observing our neighbour countries’ societies and aspirations with goodwill would broaden our minds, if we wanted to.
As long as Iranians will queue up to vote, brandish their ID cards, and say Nothing happened., their Agha and Master, nothing will change. As long as the fundamentals of the presidential elections, or any other elections, are not seriously questioned, the exercise is a mockery, a national parody.

On election day, there is no point having street demonstrations and getting people killed or injured for nothing.

We have no vision for the future to fight for. Besides, well-prepared bassidjis are in wait. If necessary, snipers from allies in the Middle East, would support the regime during the elections to shoot protesters.

The Islamic Revolution of 1979 was done in the streets with large numbers of protesters, slogans, banners and cameras. The tyrants of Tehran master every aspect of street demonstration, crowd control and mass manipulation.
However, we could try to fool them and disappoint bloodthirsty bassidjis by staying indoors. Let’s have ghost towns. Those of us who are NOT under pressure to vote can abstain and stay indoors, clearing public spaces and leaving cars in their parking lots. Those who MUST vote can vote in silence, slipping blank bulletins into ballot boxes.

The choice between democracy and dictatorship is in the hands of each one of us.

Endurance, courage, persistence, imagination, lucidity: these are some of the qualities needed on the road to freedom among other things. 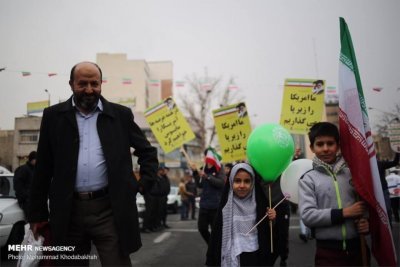 The Arba’een of Misery,1979-2019. Present and future bootlickers of the Leader. Thinning crowd but still marching and chanting, stifling the protests. 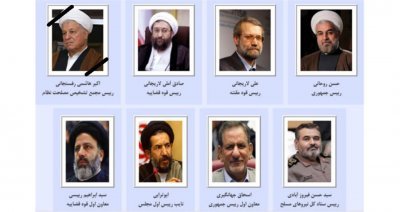 The web’s social media is not on offer for every one in Iran, censorship prevailing. The theocracy prefers things to be under control when emailing despots. 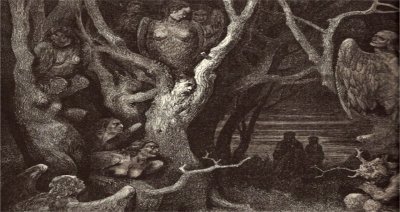 Theocracy staged a farce for Hassan Rouhani bathed in male-chauvinism with clerics, military and minions. No room for the voters: women and minorities.