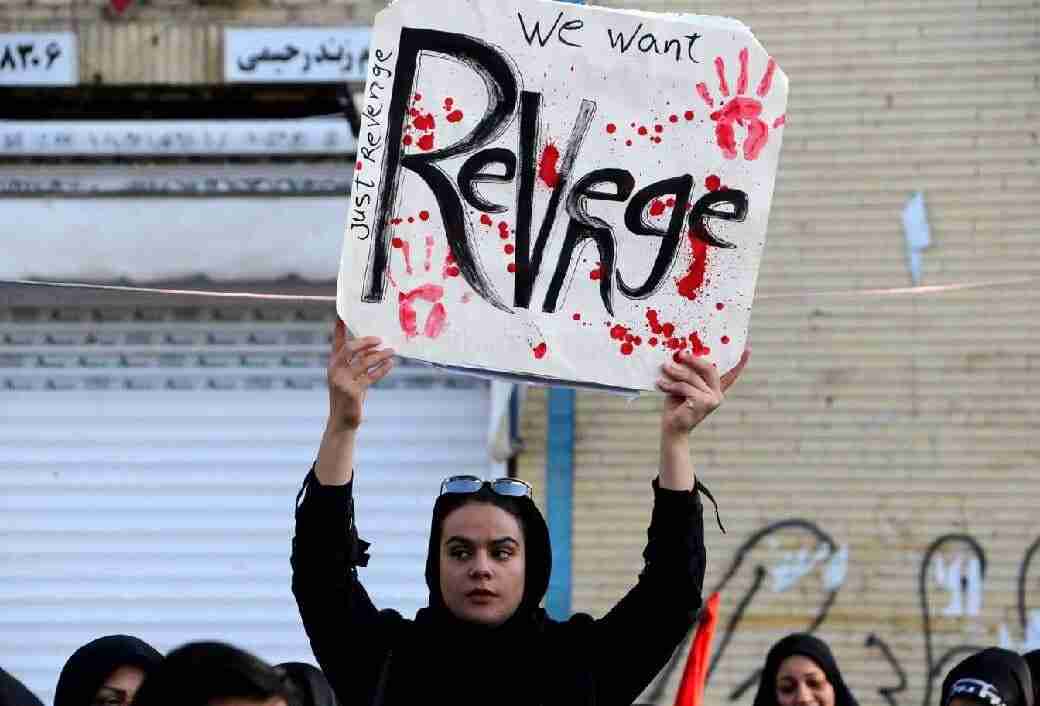 It took forty-one years for the Iranian people to openly and in public yell at the second Supreme Leader of Iran, Ali Khamenei: Scoundrel bastard! Bisharaf / بی‌شرف

Better late than never. I heard the invective in 1979 from a late friend, an early refugee from the Damned Islamic Republic. Over and over, hearing the name of the first Supreme Guide, Khomeini, sent him into a paroxysm of bewildering fury, till one day his heart betrayed him for eternity.

Between January 3rd till 11th, 2020, the Iranian paradoxes reached their paroxysm in the functionalities of the dictatorship and brainwashing followed by the expression of a deep-rooted anger and grief.

A large fraction of the Iranians is fed up, infuriated, frustrated and poorer by the day with the repeated failures the theocracy in addressing their concerns. The events taking place from November 2019 are the demonstration of the Islamic Republic’s involvement in a lethal deadlock with its own people.

However, the monster created in forty years will not perish soon.

The assassination of the Quds commander, Qasem Soleimani, on January 3rd in Iraq on Donald Trump’s presidential order fuelled the non-stop insanities, the constant chaos, the perpetual pandemonium prevailing in the Middle-East. Trump’s peremptory justifications for Soleimani’s assassination were based on spurious grounds. Dementedly and gracelessly, his administration has been scrambling to follow and justify his shifting tall tales.

The sterility of deceptive Iranian nationalism, and religious superstition, flared up once more and the theocracy was too happy to take advantage of such a nonsensical act of the Americans. Trump created an idol, a martyr from a cunning manipulator who lured the US and their allies into many traps by sacrificing the locals. The tandem of Khamenei–Soleimani was to expand the Iranian military colonialism, by using the Shiite communities in the Middle-East to advance the cause of the Velayat-e Faqih.

For years, the Iranians paid little attention to the Khamenei–Soleimani ambitions. On the domestic scene, whenever required, the crowd has participated in public burials of the martyrs of the Holy Defence.

However, many could not care less. They were busy surviving and adapting to the economic hardship and the myriad of internal issues aggravated by the regime’s incompetence and corruption.

If anything, the clerics were grateful to Trump in ending a new period of violent unrest in the Iranian cities in which the security forces, under a screen of silence, killed between a guestimate 300 and 1000 protesters and arrested some 5 – 7 thousand.

Soleimani’s burial was an occasion not to be missed in a grandiose display of clerics’ power to the world, and the Iranians united behind them. The coffin was exhibited in Baghdad, Karbala, Najaf (Iraq) before a guided tour of Iran, full of symbolism: Ahvaz, Mashhad and Tehran were covered in three days. Mourning people packed the streets; the regime provided banners, slogans and refreshments.

Overnight Allah the Merciful was Allah the Avenger. Khamenei’s elated feelings were well hidden behind his tears. Thanks to Trump, a breathing space was secured for a while. He had lost his enabler, but the replacement was readily available.

On January the 7th, the mourners in Kerman, the final destiny of the coffin, produced the expected stampede likely to happen in any large Muslim gathering: more than fifty were killed. This should have blemished the self-assuredness of Mohammad Javad Zarif, the bigoted strategist, challenging Donald Trump, the bigoted narcissist: Have you EVER seen such a sea of humanity in your life, @realdonaldtrump?

But,Zarif is not a man to be shaken with the mere trifle of 50 innocent losses.

Sadly, in the country, no one really paid attention to these victims of the Iranian Revenge. They were quickly forgotten in the celebration of the lost and found Iranian “unity” behind their Leader, and the political gains by exhibiting the remains of the dead hero.

Millions of the Iranians stayed home and away from the rallies, contemplating and fearing a looming destructive war, partly brewed at home.

The revived unity was misleading and had a theatrical dimension. It was driven by the cult of martyrdom and idolatry rooted in the Iranian culture and meticulously maintained by the clerics (Ashura, Arba’in, Passengers of light / راهیان نور ,Foundation of Martyrs / بنیاد شهید .. etc.). There is an unhealthy attraction for burials / فاتحه during which the Iranians come together, no matter whether a detested uncle or a loathsome public figure is buried.

The said uncle is buried, with the wailing family in attendance, cheeks soaked with tears and faces tormented by grief. The mourners, no less than a million men and women, were honouring the detested uncle in Qasem Soleimani.

The IRGC apparatus has been the armed hand by which the regime has oppressed its own people. For decades, they have arrested and tortured thousands, if not hundreds of thousands. They have killed and executed their own people, the Iranians.

No one better than Soleimani symbolised the domestic crackdowns and the waste of the people’s money in exporting the revolution at the expense of the Iranian welfare. But for all that, the sterility of deceptive Iranian nationalism and religious superstition flared up; the cheeks soaked with tears, and the bosoms beaten. The clerics relished their moment of glory: organising expertly orchestrated funerals.

How could anyone who opposes the Islamic Republic of Iran, sympathise with one of the most reactionary and violent forces responsible for the assassination, torture and massacre of thousands of Iranian and Middle-Eastern civilians over the past decades?

How could anyone side with a military-economic mafia that has thrived due to the political-religious patronage, depriving them of the means of living decently, denying their children employment, and killing their hope for the future?

Our heart may betray us for eternity before we understand the weathercock spinning in the minds. The unlawful presidential order for Soleimani’s assassination achieved one thing: Trump Made Iran Great Again for a couple of days by giving the Velayat-e Faqih a martyr to idolise. This emboldens the clerics that run long-term politics from a weak position by galvanising their followers as their winning card.

Wreak Vengeance in an Unimaginable Tragedy

On January the 8th, the Iranian IRGC “carefully and with warning” attacked two bases in Iraq, to show its might to the world, what the future may bring for the American forces and how the regime wants to quell its thirst for revenge in the future.

The first headlines in Europe carried calls for de-escalation between the USA and Iran as an international priority. Regarding the tense USA–Iran relationship, the purgative function of European politics is making statements followed by a little diplomatic fuss and no action.

A short story followed the Iranian attacks on the Iraqi soil, reporting the crash of a civilian aircraft a few minutes after taking off from IKA (Tehran Imam Khomeini International Airport). Even in the sleepy minds of the early risers on January 8th, it seemed an improbable coincidence.

The PS752 – UIA (Ukraine International Airlines) flight crash killed a total of 176 passengers and crew, after the Iranian missile attack in Iraq. In the news, to the dismay of the IRGC braggers, as the horror of the tragedy unfolded, the attacks faded back. They wanted to make the most from hitting the “Satan’s Eye” with their highly sophisticated missiles made in Iran, but the fate of a civilian aircraft shadowed their show of power superior to anything that the USA has ever experienced [sic].

Soon, the pictures and videos from the crash filled the international web. In the morning of January the 8th, the Leader, Ali Khamenei, gave a long speech in seeking revenge for the killing of Soleimani and praising the IRGC for the missile attack. The cold blooded Bisharaf did not mention the aircraft crash.

The Iranian media, addicted to being told what to report, awaited the green light from their masters. When it was given, the stories were the perfect examples of a rotten State media reporting the official cover-ups, lies and fallacious arguments.

The concerned sycophants, directly or indirectly linked to the Iranian aviation authorities, attempted to argue that the faulty design of the Boeing 737, the pilot’s error and technical faults were the causes of the crash.

With an arrogance of the tune typical of a self-righteous regime and its many followers, they pushed back the growing rumours of a missile attack on the aircraft, calling them a psychological warfare declared by the enemies.

Below is a digest of falsehoods published by the Iranian media between January 8th and 11th. We grabbed the screen shots before a cretin decides to delete these quintessential examples of the Iranian regime infamy exercised in the last four decades. We refrained from quoting IRIB (Islamic Republic of Iran Broadcasting), the trash can of disinformation, muckraking and abuse.

An Iranian Defence self-expert, Hamzeh Paryab, کارشناس امور دفاعی حمزه پاریاب further hinted the blame on the Ukrainian pilot and the faulty engines by reciting these lines: Our country’s sophisticated defence systems can identify and destroy any target with utmost precision. Only the cruelty to humiliate our glorious defence system motivates our enemies to declare the crash of the Ukrainian plane as a fault in our system.

Another lie spinner with no technical knowledge, Seyed Ali Reza Sadr Hosseini, expert on political issues and security, had this to say: Trump’s lies about the Ukrainian aircraft crash are due to his failures on the eve of the election. Our glorious air defence shot down the most accurate, expensive and sensitive US drone a few months ago. The Americans want to dim the atmosphere of happiness created by our successful missile attacks on their bases and hide the pain they feel from their snouts rubbed in the dust.

For a couple of days, indecent and monstrous speculations on the American Death Caskets [i.e. Boeing aircraft] /تابوت مرگ آمریکایی were published.

One might have expected a bit of compassion, some gentle words toward the crash victims from the officials. There were no such thing. A dry condolence from the parliament speaker, Ali Larijan, was all the State was able to produce on the tragedy.

On Friday, January 10th, a bunch of unnamed benighted little reptiles signed a collective declaration. The group of experts from the Iranian Aerospace Union and aerospace engineering graduates of Sharif University of Technology had this to say:

For three days, the Iranian media dutifully reported the official discourse, blamed the Americans and the Ukrainians. Their ramblings in “analysing the cause of the accident” were sycophantic attempts of the social climbers ingratiating themselves with the establishment. For them, the Iranians, white as lilies, were the only victims to an international psychological warfare. In the meantime, despite all the international procedures and responsibilities set out for investigating any aircraft accident, the bulldozers were hastily sent by the Iranian officials to clean up the crash scene.

How many benighted little reptiles, disposable kowtows, in Iran protect the Bisharaf rulings?

Evin prison was visited by the foreign ambassadors in Tehran to be told lies by the theocracy. In charge of the grotesque show were the Larijani brothers.

Ali Khamenei Waltzes with al-Assad,undermining Mohammad-Javad Zarif. Is the bicephalous octopus,the theocracy and the military, trying to hog the limelight?