Chronicles from Iran » Despotism » Iran: From War to Civil War

Two blatant liars, D. Trump and A. Khamenei, are pushing towards a war. Trump looks for the obliteration of Iran. Khamenei seeks the destruction of the USA.

The two blatant liars, D. Trump and A. Khamenei, are pushing towards a war between the USA and Iran. Trump is looking for the obliteration of Iran. For Khamenei the outcome of it will be the destruction of the USA.

In the remote past, a couple of macho Neanderthals could have easily imagined such a devastation. Few millennia later, humans are maybe more barbaric than ever.

Europe, including the unavailing ex-superpowers, France and the UK, watches the affair degrade, helpless. The political leaderships lack guts and boldness, and are unwilling to take political risks for the sake of better long-term achievements.

The leaders of present bigoted tribes in the world, Recep Tayyip Erdoğan, Jair Bolsonaro, Narendra Modi, Benjamin Netanyahu, Matteo Salvini, and Viktor Orbán, just to name some, are the symptoms of democracies destroying themselves, emboldened by their nepotic master in Washington.

The West is experiencing the oxymoron démocrature (démocratie + dictature). The taste is bitter in the mouth of those believing in democratic values and tolerance. However, in the general population, the awakening to the dangers of autocrats is too slow, painstaking and cellular. Thoughtful and tolerant communities have little means to match the simplistic ideas of the autocrats broadcast by social media.

The values that these leaders defend – hate, intolerance, racism, xenophobia, misogyny and jingoism – pit their own citizens against one another. They manufacture enemies, pick on minorities, see their critics as terrorists and rewrite history. Their voters have lost their own volition, sinking in their unfounded beliefs. As they close off their minds, they see others as heathens. Humans badly need leaders and a blueprint in the form of ideology; and when the leaders act and ultimately get it wrong, they invariably wreck innocent lives and stampede on the honour, pride, well-being, hope and dignity of their country.

All this has been familiar to the observers of the Iranian political scene for the last four decades. During this time, the Iranian fabrics of the society dissolved in oversimplified slogans, false promises and propaganda similar to those tweeted by @realDonaldTrump and hailed by his followers.

Sadly, since 1979, the majority of the ayatollah opponents have not been more than court jesters having strengthened the autocratic powers of theocracy.

Now then, where are the Iranian opposers to the Islamic Republic? Quite often, I am asked this by my European interlocutors. I have only one answer: Nowhere! The lame opponents are nothing but straws in the crack of a pisé wall.

In Iran, we have seventy-eight million professional pouters and moaners that are kept in check by two million clerics, IRGC, and Bassijis. To arrive at the total of eighty million Iranians, we have one million unaccounted for. These are activists, independent activists, dissidents, detractors, journalists, writers, artists, defendants of human rights, defendants of democracy; also there are those advocating dialogue between civilisations, or advocating social justice, you name it.

Many are consciously or unconsciously regimes’ apologists, most are part-timers and none is willing to share experiences and ideas as to form consensual but powerful large movement, efficient in opposing the ayatollahs.

In the Iranian jails, political prisoners are left to rot hopelessly.

In the USA, let’s mention the Monarchists and the MEK who live in their own petty worlds, and smell of the rancidity of old speeches from the 1950s through to the 1980s. The latter are backed by Trumpian men in Washington. Another dreadful American mistake.

There are not a thousand Iranians to agree on a political programme and build a credible core together. An opposition party to the Islamic Republic with a spokesperson and some people in charge of various dossiers? A jest.

After thirty years of a disastrous Islamic Republic rule and our high opinion of ourselves, we have not been able to produce a single sterling opposition group/party/faction/camp/lobby by ourselves. The tiny minority of the diaspora who speak up are divided into teensy-weensy coteries to discuss the latest gossip from Tehran: in whispers, in plotting fashion, and without doubt withholding “the Truth”.

Let us stay with some of the so-called activists of the worst kind, these Iranian doctors of palaver, self-satisfied and arrogant. With their overweening ego, they know who is buttering their bread, they linger on tiresome and bygone details. Even before foreseeing the possibilities for political changes in Iran, many see themselves minister in an improbable future government. Of these we have a baker’s dozen.

There are a mere 0.2% of free electrons, men and women in a sturdy and sharp opposition to the Islamic Republic, worthy adversaries to the âkhonds, the ayatollahs.

The Westerners do not take to them, because what they have to say does not match with what they think they know about Islam and Iran. Iranians are fond of these free electrons but with wariness using safety measures, since their opinions upset the conformist thoughts of their cushy lives coated with Taarofs.

These free electrons compel the Iranian to question himself, and the Iranian hates it. What can 0.2% of eighty million Iranians do, empty handed, empty pocketed, and hardly ever supported?

Sometimes, I share the helplessness of European journalists and their lack of understanding of events in Iran. After the episode of protests, challenging the phoney presidential elections of 2009, the acceptance of the rigged elections of 2013 and 2017, they had nothing to go on and invited experts to debate.

We do not have even a single top of the bill opponent. Our negligence is disturbing. There is noone, none, to interview who can voice a credible, viable and active party of opposition. And with this abyss, we want a better life … but how? The camel that dreams of cotton seeds believes in a miracle. We are still waiting for a messiah, a prodigy, an angel … to save us from ourselves.

In the ’80s, I took part, in Europe, in a meeting organised by the bygone party Djebheh-Meli – created in Mossadegh’s time, the 1950s, and very much against Khomeini’s regime at the time. The meeting reflected a veneration so fervent for Mossadegh that it was disgraceful. Two Iranians were overwhelmed in their own exuberance. They had made their fortune in Iran during the Shah’s rule, in the 1970s, and lived in Europe since the Islamic Revolution. Witnessing so much enthusiasm, I imagined them leaving the meeting and starting a merciless battle against the Islamic Republic. Well no such thing! On leaving the venue, the twosome criticised piercingly the organisers of the meeting before going home peacefully to have dinner.

Many from diaspora have avoided politics to focus on their own lives, while others don’t want to get into the muck with the militants and critics.

But the Velayat-e Faqih has messed up the lives of all Iranians, wherever they are. We will pay a hefty price for trying to pretend we took no part in it.

For the last half a decade or so, things have slightly changed. The palaver of no substance gives way, both in the country and outside it, to fundamental issues such as the strength of the Iranian theocracy lies in the weakness of the people in their ability to have a pragmatic vision and also that Iran’s nationalist myths are as wrong as the Islamist ones.

Double nationals of Iranian origin have occupied many chairs in Western universities. Social and human rights activists have fought alone and sacrificed their lives to try and share their thoughts with others. Hundreds of sectorial protesters make their demands heard.

It is time to get them together, to have them think and act hand in hand and join forces.

However, the long-standing reign of oppression and censorship in Iran has instilled fear and self-censorship and egotism in individuals to such a degree that crossing the thin red line to freedom and free expressions will take many years.

Consequently, there is no general vision on which to agree. Minor and temporary issues are discussed and forgotten. The illusion of reformists/moderates factions in Iran produces phantomatic changes.

Iran is imploding with the corruption, deviant behaviours, and illogical analysis cultivated by the theocracy. If D. Trump erratically changes his mind and focuses on something else, perhaps a war could be narrowly avoided. But the ills within the Iranian society will still brew, till frustration and anger boil over.

Iran has to fight and kill its evil-spirited jinns: economic ills and poverty, corruption, pollution, fear and bootlicking. The fight against the jinns will not come cheap; a devastating civil war in the explosive climate of the Middle-East may well be the cost.

The rulers in the area, the princes, emirs and presidents, are among the richest and most powerful on the planet. They have imposed a new way of governing, a blend of ego warfare, violence, and excessive repression of all opposition. The leaders of the USA, the UK and France, controlled by their own armament industries, are at their beck and call.

These emirs and princes will not miss any opportunity to score against the Islamic Republic of Iran by humiliating the country and its people.

Since 1945, we have been gulled into believing that the US was the true defender of a free, democratic world …. The shattered nominal democracy cuts through our skin as shards of broken glass.

The Iranian national myth wants it that we have overcome many invasions, and we have survived them all. Can we survive a war from within, among ourselves?

A war, civil or otherwise, would be devastating. The rulers of Iran instead of enriching the quality of life in the country have chosen to enrich uranium. Let’s hope that the course of action destroys them first, without creating a humanitarian crisis helped by a president as bigoted and crackpot as themselves.

Also, please read articles in French or Farsi sections. They are not the translated posts from English.

The Iranian Diasporas: Pity the Nation 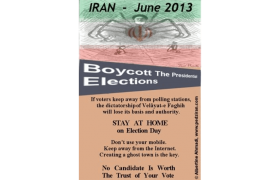 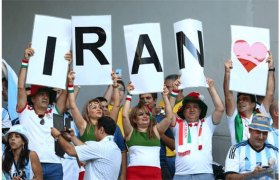 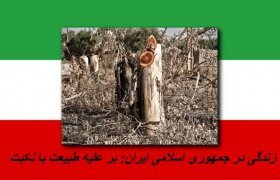 I was born and grew up in an Iranian province. I question whether the Iranian mentality grasps the basic principles of democracy.

A piece of information and warning: