The Iranians are hard hit by the Covid-19. The regime has deserted them. The confrontation between Trump and Khamenei, liers through their teeth, costs dearly.

Deceit and propaganda are the tip of the iceberg of the Iranian regime’s deliberate disregard on the spread of Covid-19 across the country. Qom, the epicentre of religious prostitution- Sigheh-, drug addiction, and Islamist sycophancy, was also the epicentre of Covid-19. But, the regime arrests the many voices who express their objections against the regime’s failures to control the devastating situation.

On April 7th, 2020, the Iranian minister of health, Saeed Namaki, announced: The second step of the Corona Country Plan is being implemented with extensive testing for Covid-19.

Actually, no one know that the Iranian authorities indeed had a first step. The authorities had hidden from the public the outbreak of Covid-19 for many weeks. They needed crowds to celebrate the anniversary of the Islamic Revolution on February the 11th and the rigged elections days later. This is no surprise, the ayatollahs run the country as their fief and they treat the population as their serfs. For them the population has never been an entity they must serve and protect. The Iranians are dispensable commodities to be sacrificed for their ideological purposes.

The Iranians have been hard hit by the pandemic. But, their authorities have deserted them and they dearly pay the price of confrontation between the birds of the same feathers. We would be at a loss if we were to choose the worse between D. Trump’s administration and Ali Khamenei’s Velayat-e Faqih. Both Iran and Trump lie through their teeth.

In decades, the ayatollahs have violently stamped on the people’s rights and ruined them to enrich their Islamic Institutions. Since 2018, the bigoted Donald Trump has strangled the Iranians by reinforcing the secondary sanctions, in a farrago of fatal missteps to satisfy his petty interests, aimed to unravel B. Obama’s presidency. Can the USA still be considered a democracy? In 2016, the general incompetence of D. Trump was disconcerting if not amusing. It was thought to be levelled thanks to the US chambers, and a check-and-balance system. Now that both seem out of order, people are worried as many are dying because of his inadequacy.

The reinforcement of the secondary sanctions on an already ruined Iranian economy has left the impoverished people to fight the virus just with the help of a dedicated medical staff in a shaky health system for all.

In the global disaster in which Covid-19 presents stark choices between life, death and the economy for the world, the Iranian authorities have once more shown what they are: liars and incompetent morons.

Their official declarations on the pandemic have been insane and highly politicised. Iran’s Supreme Guide and his minions wished to fight Covid-19 with conspiracy theories. The virus was a US bio-weapon. Therefore, Ali Khamenei refused the US offer of medical supplies. For him, the materials were designed to spread the virus further or make it last longer.

The government let the corona outbreak get out of hand, then it did too little too late.

But, it waffled a lot: personal protective equipment and ventilators were already being produced in great numbers; the virus testers were to be found in the remotest villages; hundreds of thousands of face-masks and food baskets were distributed free on a daily basis. Ali Akbar Salehi, the head of the AEOI (Atomic Energy Organization of Iran), said the agency is using gamma rays to disinfect personal protective equipment and other medical devices, and those gamma rays can only be produced in nuclear reactors. Hence, he was fabricating a reason for Iran to carry on with the nuclear programme. Further, it was claimed, numerous Iranian labs were steps ahead of Koch or Pasteur institutions in finding THE universal cure and vaccine for Covid-19.

In a nutshell, the Iranians did much better than the rest of the world combined. The sycophants of the regime even pretended that European emissaries were studying their victories over the corona.

Nothing could be farther from the truth. As always in a crisis, slow responses were wrapped in political inanities, smokescreens, and propaganda, Iranian style. The government did almost nothing to stop the spread of the virus, or implement quarantines in the most affected areas. Qom, the epicentre of religious prostitution (Sigheh), drug addiction, and Islamist sycophancy, was also the epicentre of Covid-19.

The high rates of infections and death are believed to be a cause of losing one’s face for the over-pretentious Islamic Republic of Iran and the geriatric ayatollahs running the country. Therefore, they persist in dividing the imperfect data they collect by an unknown number, before publishing them.

The behaviour of the bigoted population, a guesstimate of >20%, who could not refrain from visiting shrines and gathering for burials in their numbers, has largely contributed to spreading the virus. The religious authorities have ducked from their responsibilities, as they always do. Some were indecent enough to encourage the gatherings as a healing duty and the kissing of golden shrines as a divine remedy.

Furthermore, the nonchalance of a remarkable size of the population in going about their lives as if Covid-19 never existed, has not helped to reduce the spread of the virus.

Bigotry together with some nonchalance have spread Covid-19 with a remarkable speed, killing and infecting people who have not any other choice but to keep working. For them, dying from the virus is a possibility but dying from hunger a certainty.

The Death of Economy

For decades, the Iranian economy has been running on temporary measures and a combination of trafficking, embezzlement and spoliation. Implementing nuclear projects, military spending and engaging in proxy wars have dearly cost the population. In fulfilling the megalomaniac revolutionary aims, the authorities have squandered the country’s wealth for the benefit of a few, IRGC, to name the most voracious sector. By over-enriching a tiny clan close to the central power, they have produced millions of poor.

If lucky, some people still can keep their families fed for a while with the revenues of two or more jobs combined. But, over 45% of the Iranians are poor, and a proportion of them, in the range of 25%, are either on or below the hunger line.

These numbers are here to sketch the present situation by cross-observing. There are no checked statistics to either validate or reject them altogether. All we know for a fact is that many Iranians have little to garnish their plates, and survive with private handouts and/or public subsidies while juggling with low paid jobs or unpaid wages, hoping to receive a fraction of the monies due to them, Inshallah. They are very vulnerable to the economic consequences of coronavirus.

The Iranian authorities are desperate for money. They do not wish to have help supplied to them in the form of goods or services. In March, they rejected aid from Médecins Sans Frontières (MSF) and turned away their team of doctors. The Iranian morons in power portrayed them as part of an American spying operation.

What the Iranian authorities want from the international community is cash, billions of euros and dollars credited to the Iranian accounts, and no question asked. Even then, their voracious predatory appetite for hard money can hardly be satisfied. They will ask for more.

Why are the wealth of Astan Quds Razavi, the generous budgets of hundreds of Islamic HQ or the accounts personally controlled by Khamenei not used to alleviate the suffering of the needy in Iran?

The Iranian people are desperate for medical supplies and help in any form. Well-meaning people in the West are petitioning governments and writing open letters to this effect. The EU and the UN fear social implosion in Iran, a strong possibility that would worsen the bedlam of the Middle-East. They weakly try to make themselves heard in Washington to no avail, or come up with limited plans such as Instex.

For many, the important point to focus on is the answer to one and only question: would the money the Iranian leaders are so eager to obtain, if ever such such money were available one day, find its way to the people who need it and would the Iranian authorities spend it, to the last dollar or the euro, to alleviate people’s need?

From past experiences, the answer is no. No one trusts the Islamic Republic of Iran, either internationally or among the majority of the Iranian citizens. As long as a bunch of greedy morons serving as middle-men channel the money in Iran, there is little chance of serving those who most need it.

The money would be spent on fattening the repressive apparatus of the Islamic Republic, squandered with mismanagement, and dispatched on personal accounts.

Regrettably, the apathy and submissiveness of the population of the last four decades have prepared the path for the Covid-19 to wreak havoc in many years to come.

There is only one way out. The Iranians must get together and count on themselves to force their leaders accountable.

But who would bet on a creature to run a marathon whilst weakened by years of brainwashing, and who has barely survived the privations resulting from succeeding droughts, floods and earthquakes?

In forty years, the runner has neglected his muscles for the trial.

There is not a vision on how or with what the Velayat-e Faqih would be replaced. The nefarious consequences of Covid-19 could only be fought back with with us warming up to national concord and consensus. We are in this together wherever in the world we are.

However, in no way, we Iranians are dispensable commodities to be sacrificed for the ideological purposes of the morons that rule us. We are not their serfs. They are there to serve us. Thus, we have to make sure they hear everyone loud and clear. 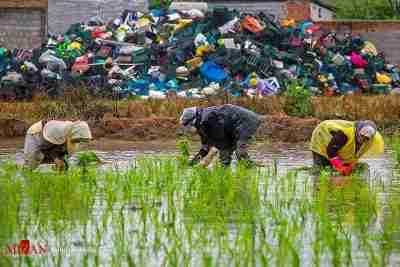 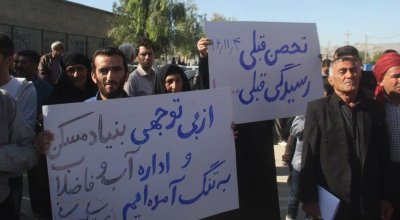