The Last Breath (1924) is a novel from Saeed Nafisi, Black Stars. It deserves a large public of readers attentive to today’s Iranian poverty and miseries.

The Last Breath (1924) is a novel from Saeed Nafisi – سعید نفیسی book, a collection of short stories, Black Stars, ستارگان سیاه, most probably first published in 1937.

The book gives the reader an understanding of the Iranian social conditions in the first half of the 20th century. It is powerful and deserves a large public of conscientious readers attentive to today’s Iranian social ills.

The book is also a vivid image of plus ça change et plus c’est la même chose / the more things change, the more they stay the same.

History is all about how social and collective experiences bring something better, worse or keep them unchanged.

From 1924 onwards, the last breath of many Maryams has flown into free air. They have knocked for help on every locked door; none had opened. In decades little has changed in Iran; either the views on the Maryams’ plight or the way poverty and misery could be mitigated.

Iran is a country in which the majority of the population’s life is in constant jeopardy either by wickedness or wretchedness.

The Iranian necrolatry honours the Islamist assassins and spits on the victims. Killing is the Islamist manner of a wicked dialogue with the opponents.

Maryam’s life is cheap, as the life of a cockroach would be. Poverty and misery are cultivated by the Islamists to keep people in check. Without a second thought, the wretched Maryams are crushed under the feet.

In a reprint, Saeed Nafisi dedicated The Last Breath to Mastoureh Afshar (1898-1946). She was a pioneer figure in the women’s rights movement in Iran and Co-founder of the Society of Patriotic Women – جمعیت نسوان وطنخواه‎:

To the eternal soul of Mastoureh Afshar, remembering the many ideas we shared for the welfare of Iranian women.

Today, all are gone and forgotten: many ideas and the brave people who expressed them.

For the past six hours, Maryam had knocked on every door. The pale winter sun was like the last breath of the dying in agony. Maryam, too, was going to set with a faded face.

On the horizon, on the edge of the vast sky, like molten wires from a blacksmith’s furnace, the last carmine rays of the setting sun had painted its surroundings with saffron, as Maryam’s cheeks were tainted with blood-red.

Little by little, the winter sun was hiding behind the curtain of the horizon. So was the sun of Maryam’s life enshrouded slowly in darkness.

Years of sleeplessness had ravaged Maryam’s fair face. The sun of Tehran, her soul mate in misfortune, had lost its splendour like the sparkles of life in Maryam’s eyes.

For the past six hours, Maryam had knocked on every door. Now, her toddler of two was sleeping next to her. Sleep is an eternal paradise for children; their innocent souls can rest there for hours in complete freedom, escaping the torture that the wretched children, hungry and ragged, suffer from the beginning of their lives in our world.

Pure angels of the world! You who place innocent children in the arms of love and deliver them forever from the hands of oppressors, Maryam will soon give you her dear child for the eternal protection.

None of the closed doors that she so desperately had knocked on, opened to her. She did not hear a voice of compassion from behind them. No generous hand reached out for her. For the last three days, Maryam has not eaten. The innocent child has shared her mother’s fast.

How long can a loving mother shed tears? The two small black eyes that adorn Maryam’s skinny face, how many teardrops can they retain?

She sat on the stone bench in front of Shemiran Gate. The people passing through the coldness of Tehran’s winter dwindled. Three or four idle men, leaning against a wall facing the gate enjoyed the late sun rays. As the sun set, they went into the warmth of a cafe across the street. The door curtain of the coffee house fell behind them and

Maryam’s last hope vanished. The last window of life was closed on her.

It is forty days in the winter. In these forty days, Maryam has not yet neared a fire to feel its warmth. In her heart and her soul, sanctuaries of life, the God-given flame is leaving her. Their soundless hearth is cold.

If she were a man, she would not be so wretched. She could have found shelter in the corner of a coffee house or on the hay of the stable of a wealthy. Where can a young lass of twenty carrying in her arms a toddler of two take refuge, except to where she is now heading?

The winter arrived forty days ago. In these forty days, the winter had attacked them out of pure malice with its bitter coldness. How long can a lass and a toddler withstand its onslaughts?

No! It must end. Maybe winter will last another forty days, maybe tomorrow she will have to knock again on every closed door for another six hours. But, should she spend tomorrow as she did today, ending up sitting on the stone bench in front of the Shemiran Gate, embraced only by the cold wind?

No! It must end. How long can such a tedious life be recommenced day after day? How long can a lonely mother, wishful in the earnest, knock on shut doors that would never open?

With this in her mind, Maryam let her last breath of life flew into the free air, entrusting the relic of her life, her sleeping toddler, to the cold wind of the winter.

For the past six hours, Maryam had knocked on every door. Finally a door was opened to her. Maybe it was heaven’s gate… I do not know. I only know the door opened for her salvation and deliverance.

For the past six hours, Maryam had knocked on shut doors. Eventually, the eternal world opened up to her. 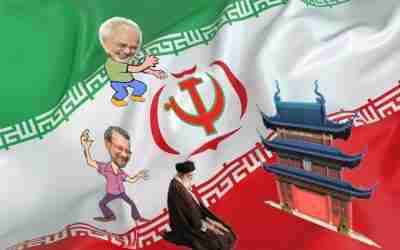